What types of storms can damage my homes roof in Reynoldsburg, Ohio?

While most roofs are built to withstand the typical weather for the region in which they are built, extreme weather can wreak havoc on even well-built roofs. The following types of storms are most likely to cause roof damage in Reynoldsburg, Ohio: wind storms, hail storms, and snow and ice storms.

Wind storms can cause roof damage in a few different ways. Some areas of a roof are more susceptible to wind damage than other areas. For instance, the corners and edges of a roof cannot withstand wind as well as the center of a roof. The edges are more likely to sustain damage because that is where roofing material is most likely to be loose, allowing wind to lift it up exposing the insulation and allowing water to leak inside it. A larger threat to consider is debris, such as tree limbs which not only damage roofing material but can actually puncture the roof itself.

Hail storms can cause damage ranging from minor to severe, based on a few different variables such as the size of the hail, the age of the roof, and the building materials. Hail is likely to split wood shingles, but it will leave ding marks in asphalt or composite shingles. Small sized hail is less likely to cause as much damage as baseball sized hail, which, like debris in a windstorm, can puncture the roof.

In winter months, both snow storms and ice storms put an extra toll on a roof. Snow or ice measuring inches deep creates a lot of extra weight. This can cause cracks in the drywall inside the house. Heavy snow and ice can also cause a roof to cave in creating potentially devastating loss. It isn’t really advisable to shovel the snow off a roof or to use rock salt to melt it as these are both likely to cause damage to the roof as well as personal injury. There are professionals that can remove the snow safely.

One of the largest threats from snow and ice storms is called an ice dam. Ice dams occur when there is snow on the roof and heat leaks from the roof melting the snow from underneath. This melting snow meets freezing air as it flows turning it into ice which builds up most commonly on the eves of a house, creating an ice dam. When snow melts at a later time it has no clear path for drainage. This can cause the roof to leak into the house causing damage to the roof as well as the walls and ceiling. It can also cause bodily injury from the ice dam eventually falling or from attempting to remove it from the roof.

Simply fill out this form and you'll hear from our friendly service team shortly.

Rosehill Roofing & Contracting Proudly Serves Columbus, and the Surrounding Areas. Including, but not limited to: 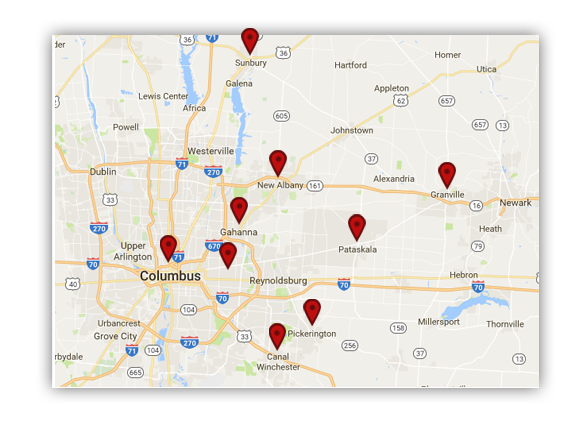